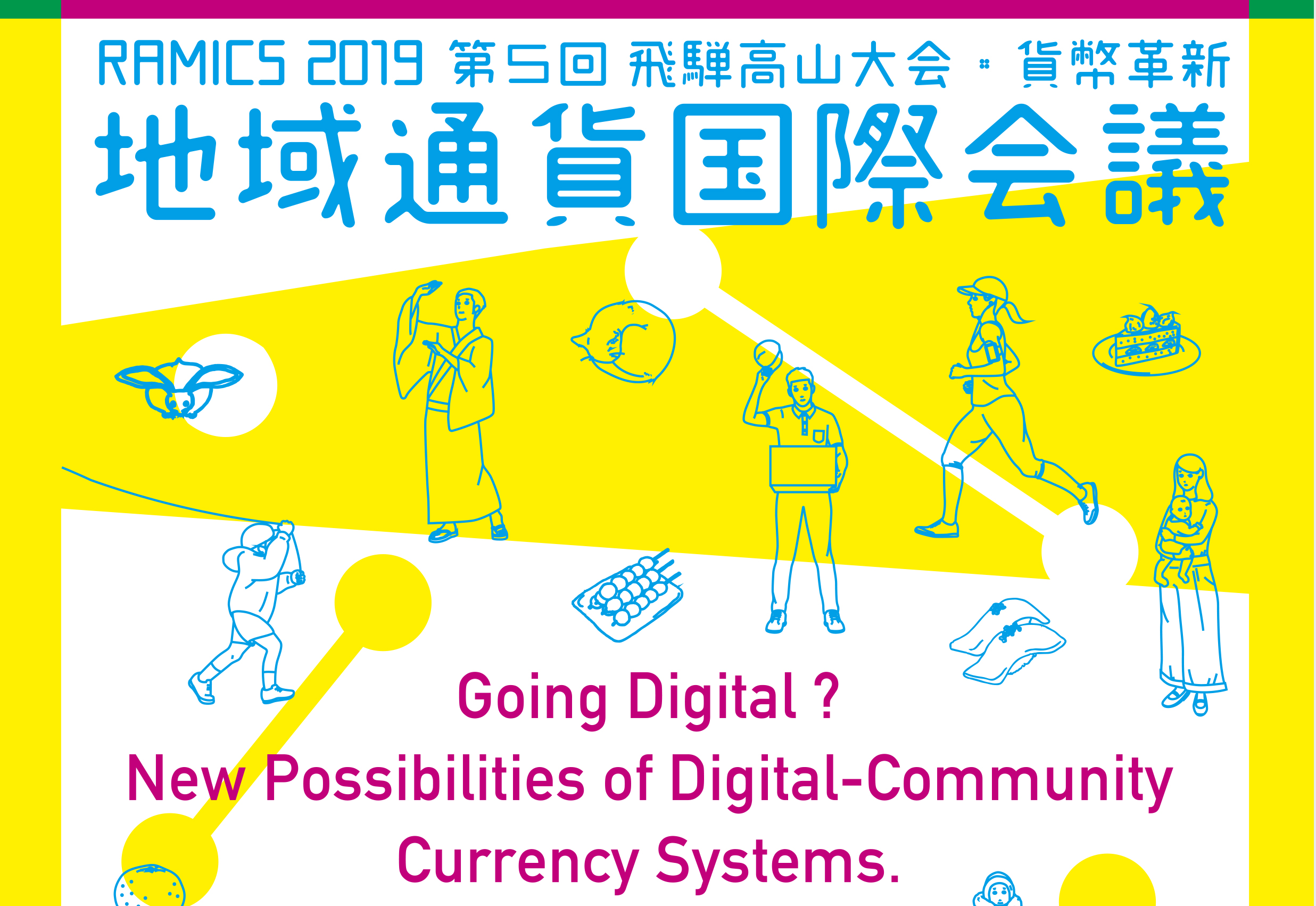 Research Association on Monetary Innovation and Community and Complementary Currency Systems (RAMICS) is a biennial international congress of researchers on the newly emerging private currency systems during the past few decades, such as community currencies and cryptocurrencies, and their socioeconomic significance and impacts, as well as the technological innovations for ICT that form the basis for such systems. All the previous congresses have so far been held in European and American countries such as Lyon, France (2011), The Hague, The Netherlands (2013), Salvador da Bahia, Brazil (2015) andBarcelona, Spain (2017). 5th congress held in Japan is the first in Asia.
In Japan, the practice and research of community currencies have been active since the late 1990s, and cryptocurrencies have gained

recognition rapidly in recent years, and the private sector has been positively working on their applications. There is now a new ongoing trend in which the vision of community currencies and the technology of cryptocurrencies are being integrated.

Facebook’s recent announcement of Libra、a glocal digital community currency, is part of this trend.The venue for RAMICS 2019 was chosen to be Hida-Takayama because the pioneering digital local currency “Sarubobo coin”, which symbolizes the dynamic evolution of money, and the wooden local currency “Enepo”、which supports volunteers who felled lumber from tree thinning,

continue to be active there. The main theme of this congress is to estimate the possibility of digitization of currencies, particularly digital communiｭty currencies from various viewpoints. Hlda-Takayama, where both digital and analog cases coexist, was considered the perfect place to discuss this topic This intemational congress is very unique in that it holds two types of conferences over five days. The first 2 days (September 11, 12) is the academic conference in which university and private researchers will report their research and hold symposiums. The last 2 days (Sep 14, 15) is the practitioner conference (convention) in which local governments, private companies, NPOs, etc. will hold a wide range of events such as case reports, panel reports, discussions、seminars, hackathons, local currency markets, etc. On the 3rd day (September 13), a tour to inspect Sarubocoin and Enepo is scheduled. We look forward to the active participation of as many people as possible.

Japan Association for Evolutionary Economics join1Jy hosts the conference. Senshu University Digital Community Currency Consortium Laboratory (Good Money Lab), Hida Credit Union and NPO Bioenergy Academy are in cooperation with us. Takayama City, Hida City, Shirakawa Village、Gero City, Takayama Chamber of Commerce and Industry, and Hida Takayama Tourist Convention Center are our supporters. We would like to express our gratitude to these organizations and all those involved for financial and other forms of support and cooperation they have provided us.

Last but not least, since the establishment of the organizing committee in April last year, volunteers from universities in many places in Japan and organizations in Hida-Takayama have participated in the organizing committee. As the general chair ofthe committee, Iw ould like to express mys incere appreciation for their great efforts in preparing for RAMICS2019. Thank you very much.

The impact of digitization on the trajectory of a local currency: The Eusko in the French Basque Country

How could blockchain be a key resource in the value creation process of a local
currency? A case study centered on Eusko.
Geraid Wheatley, Jaume Catarineu, Mark Anielski, Sierra Love, and Byra Danaa.

Chikako Nakayama and Manabu Kuwata.
An Investigation of social and credit theory of money focusing on regional and crypto currencies
Kiminori Hayashi.
Reconsideration of the meaning of regional currency -Case of Chiemgauer-
Mayumi Dan and Kayo Okabe.
Utilizing Regional Currency as an Educational Tool for Community-Building

Peter Brass.
profit and utility-approach of a local monetary scheme for a utility oriented society
Alexander Zatko.
Toward Merit economy

Yuji Aruka.
The rise of smart contract and its complex impacts on the digital ecosystem
Vincenzo Giorgino.
A Life-centered perspective for a wise commons-based ecosystem.

Gabriella Gimigliano and Valentino Cattelan.
Digital complementary currencies: are they sustainable? Limit to growthi and the cegotiability of money in Europe

Leanne Ussher and Chris Hewitt.
Network Analysis of the Hudson Valley Current
Oriane Lafuente-Sampietro.
Local complementary currencies and the local multiplier, a network analysis approach on the case of the SoNantes

受け手が贈り手を育てるまち～地域通貨ぶんじ
Those who THANK Nurse Those who GIVE ～community currency “BUNJI” at Kokubunji-city, Tokyo～

"The Keys to Sustainability of Long-lived Local Currencies inJapan”